On Sunday my mom gave me a couple pounds of frozen cherries. My boyfriend got very excited about cherry pie but here is a big shameful secret: I do not care for cherry pie. It’s a texture thing. I like eating cherries although they are a little labor intensive (pits and all) but they are rather too “bursty” for me in pie form. Ditto for cherry cobbler.

I wanted to use the cherries but also be interested in eating what I made with them. In perusing the internet yesterday I discovered a recipe for cherry crumble cake. This appealed to me because I am a) a big fan of crumble and b) a big fan of cake.

Some notes on how I used the recipe:

– Because I was starting with frozen cherries from last summer rather than fresh ones, I first thawed the cherries and drained them for a while, which I think worked well.

– I didn’t have any sour cream and wasn’t particularly interested in going to the store for it, but a friend reminded me that yogurt is a fine substitute. I had honey vanilla Greek yogurt so I used that and backed off a bit of the vanilla in the recipe. I’m not sure it made a difference either way but it certainly didn’t hurt.

– In my opinion, the crumble part of the recipe is a little short on butter. The recipe says to blend the crumble topping with a pastry blender until “large clumps” form. In my experience crumble is better if you avoid large clumps and instead shoot for something with pea-sized bits of butter throughout. To do this, you’ll need more butter (or less flour) than is called for in the recipe. I’ll have to tinker with it the next time I make this. (I also prefer oats in my crumble topping, but I left them out. It would probably make the finished result a little too heavy.)

– I didn’t use the cherry fortified wine but if you have something like that on hand, it would probably be a nice touch.

– I did plain whipped cream with the last bit of a carton we happened to have in the fridge. Generally I would choose ice cream over whipped cream or just the cake on its own, it’s up to you. 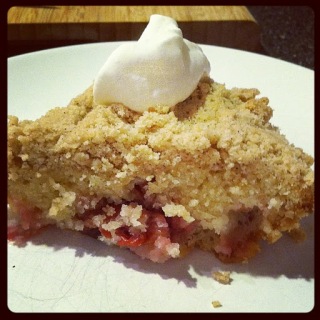 Oh hai my cheap IKEA plates are all scratched up.

End result: YUM. I will definitely make this again. I’ll probably reduce the total amount of crumble though, it was a little too much for me. The cake/crumble combo is the perfect venue for the cherries, and served warm out of the oven this was really quite good. In fact I’d say it’s another county fair contender if I choose to go the cake route this year.

One thought on “Cherry crumble cake.”