I’ve loosely instituted Cupcake Monday at work, which means, essentially, that I will bring cupcakes to work on Monday when I feel like it.

I mentioned I was having a cupcake moment recently, and I know this seems annoyingly behind the times. I just really like making them, I don’t know why. I guess because it is not hard to make them look adorable? And because you can taste one to make sure it’s delicious and it doesn’t ruin the whole thing, like it would with a whole cake. (Although I have been known to cut the bottom off of a pound cake. WHAT, IT NEEDS TO BE LEVELED.)

This week I decided to make Oreo cupcakes with brownie frosting. Yes you read that right…the frosting is made of brownies. Nature’s most perfect food? Draw your own opinion but I think YES.

I got the recipe from Your Cup of Cake, which is full of cupcake recipes I wish to try immediately. If my cupcake moment lasts through Halloween and into the holidays, at least I know I’ll have an outlet for my fixation.

These cupcakes were very easy to make. A lot of the recipes I’m finding start with a box of cake mix and while I think it is often just as easy to make cake from scratch, doctored-up cake mix seems fine for cupcakes.

For the brownie frosting though—which calls for actual brownies, not just the taste of brownies—I really didn’t want to mix, bake, cool and slice a batch of brownies just to bash them to bits for frosting. Not from scratch and really not even from a mix. I thought that I recalled the existence of a tear-and-bake brownie akin to slice-and-bake cookies, but if such a thing ever existed or still exists I couldn’t find it.

So, I bought them from the bakery at the grocery store.

I used my huge French icing tip to pipe the frosting. 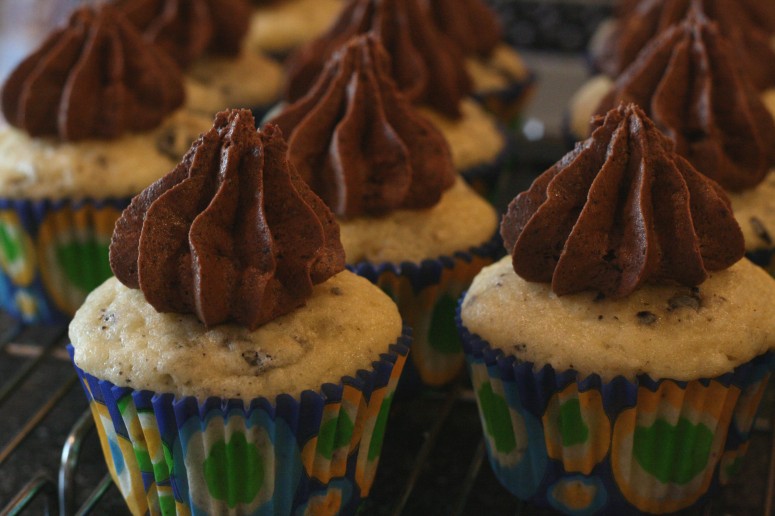 I thought about garnishing the cupcakes with leftover crushed Oreos as depicted on Your Cup of Cake, but the cake + frosting combo is rich enough without it, and it doesn’t really add anything visually, so I skipped it. I baked these in cupcake liners by Cupcake Creations, which I found at Pat Catan’s. They worked very well. They’re not foil lined but they didn’t seem to fade during baking.

As for the taste, the Oreo cake is very good. The frosting I personally am not as bonkers about, it’s super rich which is why I only used a little bit. But I think the bittersweet taste will appeal to a lot of people and the brownie bits are a nice touch.