Technically these are “Cookie Dough Brownie Bars” but I think the cookie dough topping is more accurately called frosting. The only thing that would make it more frosting-like is using powdered sugar instead of granulated, but that would take away from the cookie dough texture, I think.

And before you go getting worried about salmonella, let me reassure you: the cookie dough frosting does not contain eggs. Butter, sugar, flour, vanilla and a little milk or cream (I used half and half) for moisture. And chocolate chips, of course. (I eat regular cookie dough anyway and have thus far lived to tell the tale. But I understand that, strictly speaking, that isn’t the best idea.)

I was skeptical of these at first, but they are actually very good, particularly if you have a high-tolerance sweet tooth. I cut them in very small squares—less than 2 inches—and I think that was about right. I can’t imagine wanting much more than that.

The one issue I have with these, and with other bar recipes I’ve made, is that they benefit greatly from being served and consumed slightly chilled. This is fine if you intend to keep them at home to snack on or if you’re taking them to a party where adequate fridge space will be available, but they don’t work so well if you’re going to set them outside on a picnic table during the summer, or bring them to work and put them out for day-long nibbling. Of course they don’t actually “melt” or anything like that, but they are a good deal more messy at room temperature. I think the frosting tastes a little better chilled as well—chilling and freezing suppresses sweetness to some degree, so the sugar isn’t quite as in-your-face at a colder temp. Just something to think about.

However if the experience at my office is any indication, they won’t last all that long anyway. 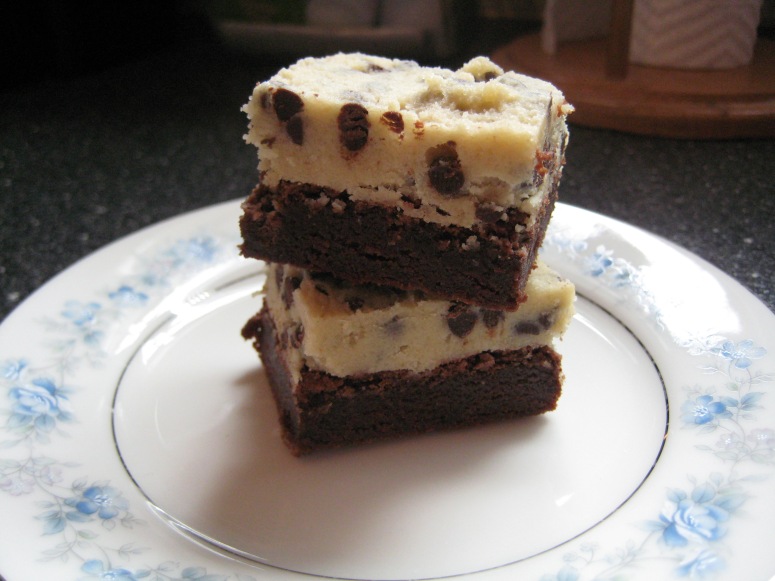 The brownie recipe I used was the one I have used since time began, Cocoa Brownies from the 1963 Betty Crocker Cooky Book. I have written affectionately about this book before and it has never, ever steered me wrong (and in fact this particular recipe won an honorable mention at the county fair in 2011). When I took it off the kitchen shelf on Sunday I saw it had sustained a bit of water damage in our recent house fire, but I don’t mind. The slight damage and crinkly-ness of the pages reminds me of the original edition at my mom’s house, and I like that very much.

I’ve copied the recipe below; I can’t seem to find it online anywhere. Be aware that this brownie batter will be thick and fluffy enough that you’ll need to spread it in the pan with a spatula. If you opt to use 1/2 cup melted butter (allow to cool slightly before stirring it into the rest of the ingredients) instead of shortening, the batter will be more liquid.