It’s difficult to share knitting when you are, in the main anyhow, making gifts for people, or in this case one person – a small niece due in April. I don’t tell folks about this corner of the internet but still. A surprise is a surprise.

I recently went through my yarn stash to make sure all the wools and such were securely sealed in Ziploc bags and plastic containers. I photographed everything and updated it all in Ravelry, which was an immensely satisfying exercise. During the whole process I rediscovered several skeins of yarn I’d purchased in Dublin in 2012 (the shame of me!) and resolved to think up uses for them right away.

The yarns in question included two skeins of Donegal tweed, three of gray alpaca with a bit of silver and one very gorgeous skein of hand-dyed cashmere lace weight. (This last one concerns me a bit as it was a) very expensive and b) since purchasing it I’ve discovered I really don’t care for lace knitting, at all. But that’s another story.)

Still – each of these skeins is bit special since they’re from my first trip to Dublin and I well remember researching yarn stores located near places we were likely to be. Once there I didn’t really have a ton of time to linger, so my choices were a bit hurried and I ended up selecting at least one yarn that I can literally buy around the corner from my own house! It’s no less special to me but it is extra fun to find things while traveling that you just can’t get at home.

Currently I’m using some of this yarn to knit a few things for myself. With the gray alpaca I’m making Mira’s Cowl (free pattern, should you fancy it) and some of the tweed has gone into a pair of mittens. 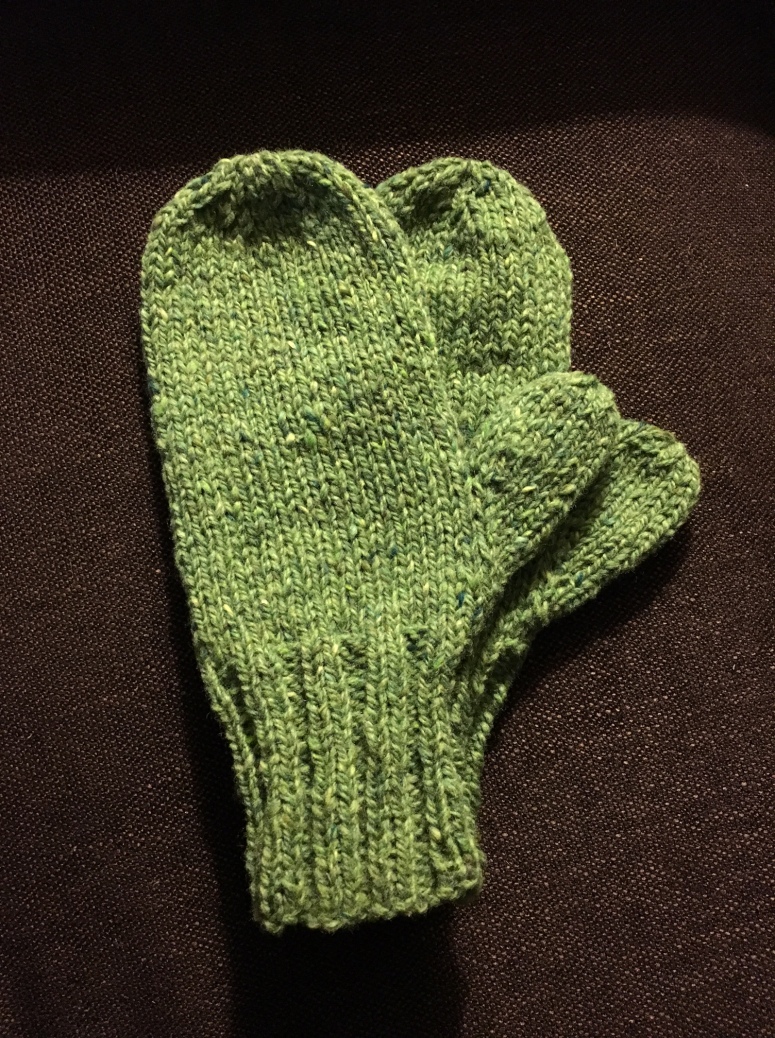 The mittens were less successful than they might have been. For one thing, the first one came out nearly perfect while the second is considerably smaller – not so small I can’t wear it, but small enough to look a little silly when they’re side by side (I’ve artfully hidden this in the picture). This could of course be my own error, but it’s also owing to the variations in the yarn. The second part of the skein was much thinner than the first and I had a sinking feeling it was going to make itself known in the finished product.

Still – first pair of mittens I’ve attempted and they will keep my hands warm this winter. Once I finish the Mira’s Cowl I’ve got it in my head to tackle cables, perhaps on a simple scarf.